I really should be a better golfer. My dad -- who was so poor as a child he never really knew how to stop working later in life -- allowed himself one semi-unrestrained pleasure: golf clubs, a cart (if it was absolutely required), and a round of golf, perhaps, on average once a month.  He did build a mountain cabin vacation home on a golf course, as well, and we grew up playing the three closest holes, over and over, after hours in the summer.

We golfed in the dark. We golfed at the crack of dawn--dodging the big, ultra-soaking industrial RainBird sprinklers. We once fished 259 golf balls out of a water hazard.  We plowed dozens of junk balls into Grass Valley Lake. We would hide behind the manzanita bushes near the 15th green, wait for someone to hit the ball out of bounds, run like mad, replace the ball with an egg, and then watch the reaction from a crack in the cellar beneath the porch -- where one day a portly dude with a beanie kept yelling "damn kids" several times, before giving up and dribbling another ball out of his pocket.  (The universe got back at me for that one, because I took a line drive four iron shot to the mouth as a seventeen year old, when I wandered onto another fairway without looking, turning my upper lip into a golf-ball sized mound for a week.) 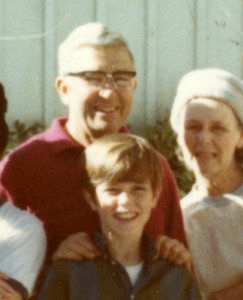 Dad, as time went by, began to take pride in my game.   The years he had spent waiting for my brother and I to hack our way down the fairway were beginning to pay off, not because we were ever par golfers, but because there were those rare moments -- almost all golfers have them -- of something like perfection.   Golf is a bit like flying, like playing with rockets.  It's a sport that actually allows you to knock something down the valley 320 yards.   If you've never had that moment where the ball doesn't just leap off the tee, but actually appears to launch itself, with fuel behind it, it's hard to describe. It's like a gun shot, but better, because it's just you and the club and the ball and your furious, solitary mind doing the work.  Dad knew I was becoming addicted to it, and he was proud of that addiction.  He sent me off to Billy Casper golf camp as a fourteen year old, and for a very brief time, after golfing almost every day for eight weeks, I became nearly respectable, if not a real contender.

Even though Dad golfed for business, he loved the game so much, he began preferring his sons' presence out on the course, and for a time, it was our primary connection.  Vast green fairways, ultra-manicured greens, cold Coca-Cola and BLTs at the club house.   Dad saying, "I can't believe how far you hit that thing on the 17th, Jim.  You have a swing!"

Well, dragons live forever, but not so little boys.   I inherited my dad's serious work ethic, and the older I got, the more I wanted to be some place like Harvard when I got out of high school. I became a genuine grind, obscenely competitive about academics in the way some young men are about drag racing, or football. Dad kept asking me to play, but I was getting wound tighter and tighter.   I got restless on the course.  I began slicing the ball in epic, window-breaking arcs.  But Dad was still proud of my swing, and still anxious to get me out for another round, even though I was turning him down more and more.

As a young guy in business, I was obsessed with coding computers, with writing software, and I would program from 5 in the morning until nine at night.  I was going to make my fortune in it, and I rarely said yes to a game of golf.  Dad kept asking and I kept apologizing.

As a young father, I was no less of a grind.  Given the load of bills and debt and the hope of grand prospects, I just stopped playing altogether.  As my dad aged, my wife would gently remind me, "don't you think you should go out and golf with your dad?" Sometimes it worked, and I would hack my way around the course, but I was always off, mentally, somewhere else, and eventually Dad got too old to play, and there were no more requests.   Scott tried to build a putting green for him here on the farm, but the long Saturday 18 hole rounds out on the course were over.

Dad would sing out on the course.  McNamara's Band.  If I had the Wings of an Angel. Cab driver, once more round the block.  In business, he was under enormous pressure all the time.  Sales.  Debt. Children in college.  He worked harder than any reasonable person could expect.   When he was out on the course, he could tune out for a short time. Even if he were talking about business, out on the golf course, it was all just a distant storm.  On a putting green, business became just sort of a pleasant, mental puzzle, not a worry.

Dad sang another song that haunts me now. It was about a son who regretted not doing better by his father. I don't remember it all, but the one line:  "I'd give all that I own, if I could but atone to that silver haired daddy of mine.."

I'm pretty sure Dad would smile at me now, knowing that I regret not golfing with him more.  He wasn't the sort to hold a grudge, and I think he would just chuckle, tease, and sing the song again.

He would tell to buy golf clubs for my sons.

So that's what I did.  Life is what happens when you take a break from it.

Next Blog: The Charming Puzzle